Looking for a noun and verb identification printable? Check out this couple of FREE worksheets that are so much fun! 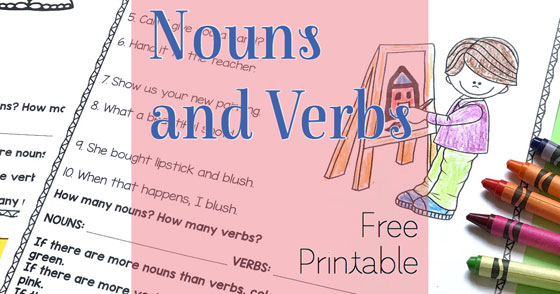 Is “brush” a verb or a noun? Well, you, as a teacher, know that the answer depends on the context.

In “I brush my teeth every day”, the word “brush” is a verb.

In “I can’t find the brush anywhere!”, the word brush is a noun.

But I don’t have to tell you that.

The real question is: do your students know that one word can be both a noun and a verb?

Find out by having them complete the worksheets I’m sharing with you today!

They have to underline the verbs and circle the nouns in sentences.

Then, they tally the verbs and the nouns.

Next, they’ll color the illustration according to the number of verbs and nouns they identified.

Every pair of sentences has one word in common, like “cross” (verb) and “cross” (noun) because I’d like students to really notice how the same word can be a different part of speech depending on the context in which it is used.

Hope you and your students enjoy this fun practice!

Thank you for stopping by!